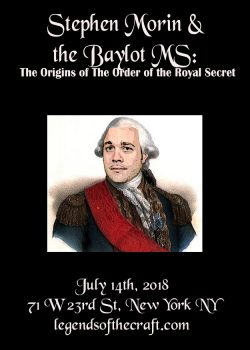 One of the most elusive questions of the Ancient and Accepted Scottish Rite concerns its origins; where
exactly did it come from and from what source does its ritual emanate? Many scholars have rightfully
determined that Étienne Morin, also known as Stephen Morin, is the founder of this system, but it is even
less certain precisely from whence his authority came, let alone who Étienne Morin was. The truth is that
we only have a partial picture of who he was and the circumstances concerning his authority to establish
the rite. Nevertheless, when one assembles all of the evidence and gathers still more, there is still enough
light left in the fragments, to project a more complete vision of the truth.

A close examination of the Baylot Manuscript in comparison to the Francken Manuscripts in particular
is necessary because it reveals that the Baylot manuscript forms the nucleus of what became the Order of the
Royal Secret, and later still developing into the Ancient and Accepted Scottish Rite.