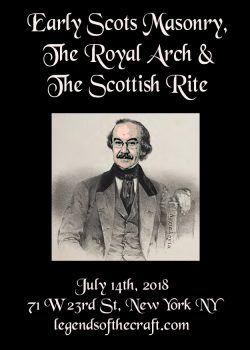 In the early 1730s in England there were “Scotch Masons” or “Scots Master Masons,” which was a step after the Master Mason Degree (and apparently unrelated to Scotland).

By 1742 in Berlin there was talk of “higher or so-called Scottish Masonry.”

In 1743 the Grand Lodge of France adopted a regulation limiting the privileges of “Scots Masters” in lodges.

It’s clear from these few mentions that something was going on behind the scenes with “Scottish Masonry,” but we’re not quite sure what. These developments were happening at the same time the Royal Arch was gestating before its birth in 1754. It’s even possible that the Royal Arch and Scottish Masonry came from the same sources.